A three-week virtual internship with Lorena for Senate campaign.
LINK is the internship opportunity for juniors at Animas High School to get out in the community, or a community, and explore passions and ideas for careers and future jobs. Juniors are provided with three-weeks without classes to explore an internship that they set up themselves throughout the year.

With the new reality of a pandemic, a lot of internships for my class were cancelled or had to be postponed, because either the business wasn't open or there was too much risk involved. The internship that I had set-up in January couldn't postpone during the pandemic because they're a political campaign, for which the deadlines and priorities don't change regardless of conditions.

I chose to intern with Lorena Garcia for US Senate because I wanted to explore a career in politics and what that actually means. There were a lot of different types of political internships that I considered, but I chose Lorena's because of the work she's done with non-profits and the fact that she made me hopeful in her as a candidate. I realized quickly that I lot of motivation to do work will come from a passion and belief that you're fighting for the right thing. My mentor was with the campaign's field manager, Hayley, and I mostly worked with the field team and communications team.

Communications meeting with Brittney Buckley, Amelia Linnet, and Hayley Benyai-Becker (the best mentor).
While writing a story for the Quill about an Animas High School alumnae that returned from her Peace Corps service, I realized that some people’s minds are wired to help people. I found out quickly that Lorena was one of those people.

My interest in politics was waning with the current state of the political climate. This is why I was kind of relieved when all the internships for the year got cancelled, I would be able to re-think and choose something that I think could be an actual career, my hope in all politics was dwindling. I got an email from Hayley the next week asking if I still wanted to do an internship. At that point I had run out of random things to do around my house and said yes just for something to do. I thought, can’t hurt, it’s just three weeks.

I think I went a little overboard in the first week. After just a few days I was completely convinced:  Lorena was the best candidate hands down. She was the only one I would even consider doing an internship with. Within days, I felt trust, friendship, and unity with so many of the other volunteers and my mentor, Hayley.

I wanted what everyone wants out of an internship, I think, to affect something, to have the work I did and the things I learned to matter. I wanted my three weeks of work to change the tide of the political system, I wanted to get Lorena elected. I believed whole-heartedly by my second day that some miracle would happen and we would have a new kind of representative. I am one person, just like Lorena is one person, surrounded by a lot of other one-persons that don’t know how to compete with multi-millionaires. But I learned in those three weeks that there are so many more one-persons than millionaires, and it filled me with hope for the future that I haven’t had in a long time.

So today, it didn’t matter that Lorena won’t be elected to the US Senate, tomorrow it matters that we try again. I didn’t know what I wanted my internship to be, I had no idea what it was going to look like, but I don’t think any of that mattered. I’m incredibly grateful that I got to meet and collaborate with so many people on the campaign and see how passionate a job can really be. 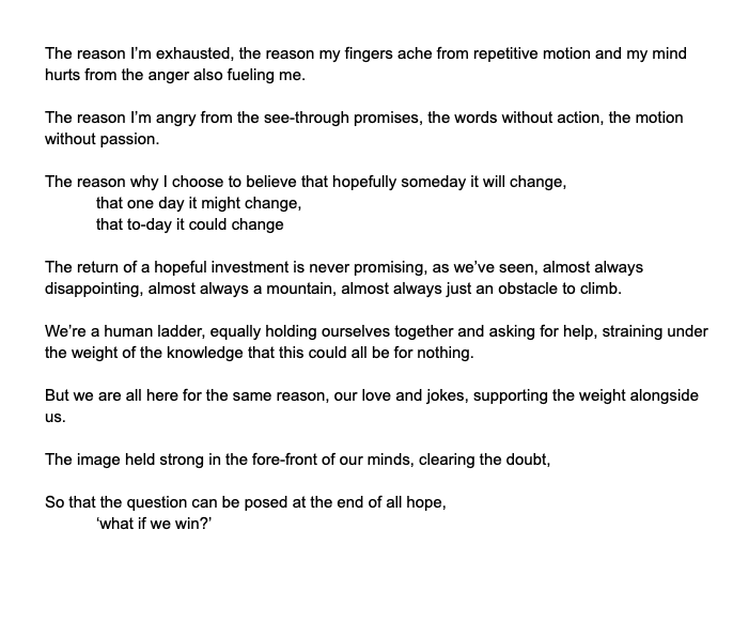