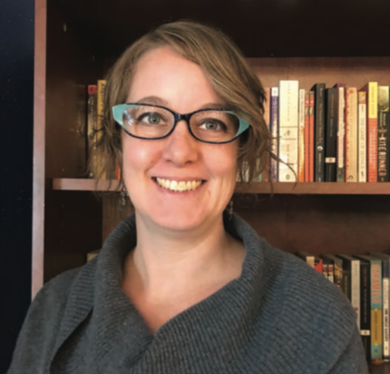 Lori Fisher is among the best and brightest of the human species, so it was no surprise to the Animas High School community when she won the award for Best Educator in the 2019 Best of Durango awards.
Lori felt humbly honored by the recognition. “To win that, people had to vote for me,” she commented. “To get recognized as a teacher is rare.”
She has been with Animas from the beginning, even counting the heads of the first graduating class of 2013 when they were freshmen to make sure they had enough funding to be a school. She found our wonderful teaching community in a Google search of “project-based charter schools Colorado.” She felt the forces align when she found Animas, which was closely modeled upon the school where she was working at the time, High Tech High in San Diego.
Lori started her journey when she was growing up in Homer, Alaska, and she had to create fun with her friends by going to abandoned factories and sliding down wood chip piles or by repelling down water towers.
She left her small town in order to pursue her BA in Peace and Conflict Studies from the University of California, Berkeley. After graduation, she found a job as a fundraiser and lobbyist for YouthBuild USA. There she discovered she did not like writing grants at all, so she broke up with her boyfriend of six years and went on a trip to Nepal by herself.  After exploring South-East Asia, she found herself in Thailand and became a divemaster.
Lori planned to live in Thailand indefinitely to revel in her love of water and Thai food, but falling in love with one John Fisher threw a wrench into her plans.
She had traveled back to the U.S. to sell all of her belongings but found herself applying to graduate school at the Stanford Teacher Education Program and pursuing love instead. Although her favorite activity back then was wearing her Berkeley shirt on the Stanford Campus, she claims that the biggest influences to her teaching methods were her mentors at Stanford.
Sam Wineburg, Stanford professor of Education and History, responded to Lori’s talent and success: "From the moment I met Lori, I knew she was going to be a superstar teacher. She was open-minded and understood the Social Studies curriculum in a global context, at a time when many still did not. It is no surprise to me that she is being recognized for her talents. It's about time!"
Lori commented on the effectiveness of her teaching: “The first thing you have to do is know your students. If you don’t do that you’re flying blind. Support comes with experience and time. A lot of times what you’re doing for struggling students is helping everybody.”
Lori has been cracking the code of teaching since 2006, and many will forever be better writers and humans because of her.  It isn’t hard to see how many of her students have dubbed her an ‘iconic teacher.’ She has found a way to bring fun and engagement into her classroom while balancing the core conflicts of teaching. Lori started her career thinking that she “could be an okay teacher.” She has shown all of us that she’s not just “okay.” She’s the best.